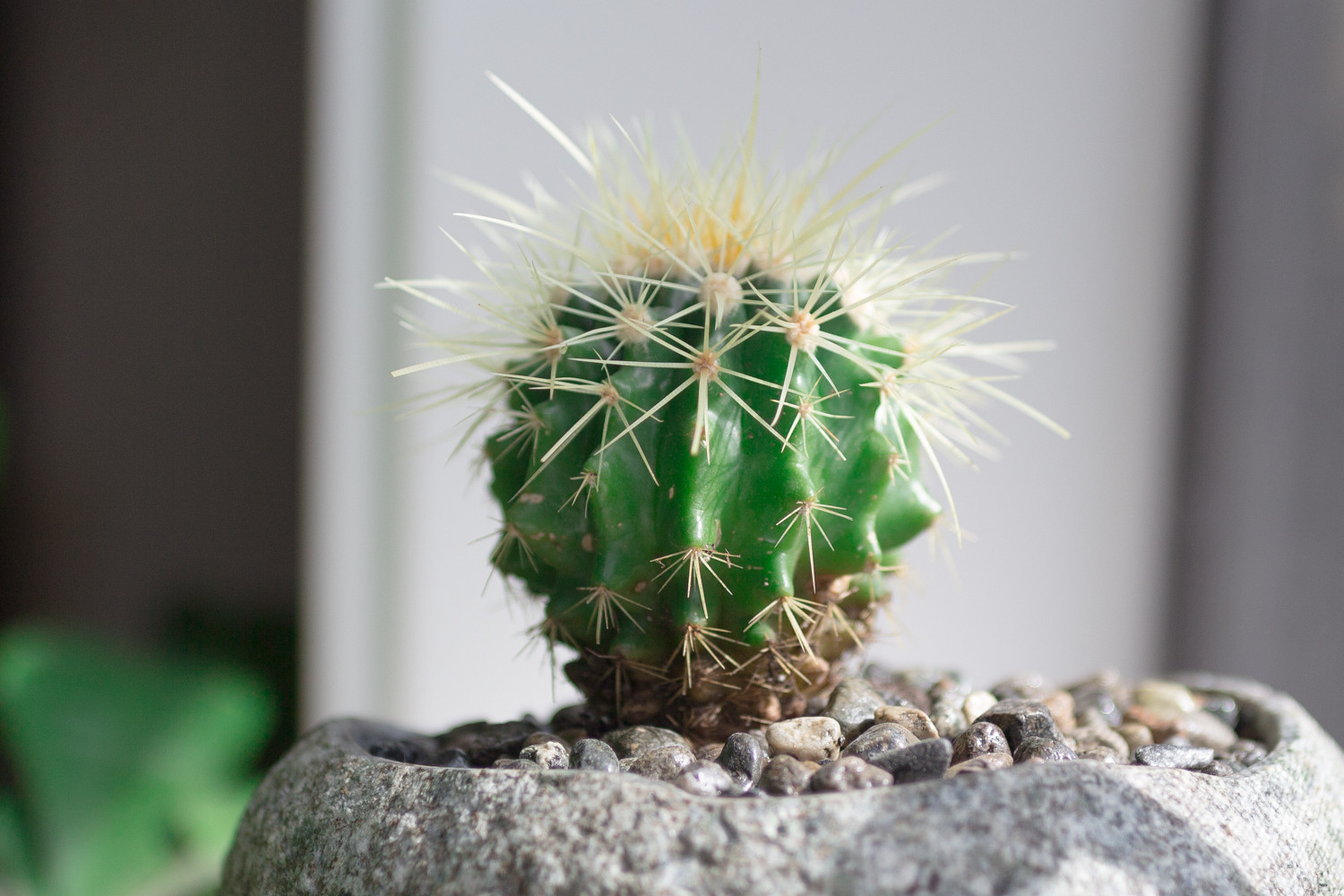 This is a post about my most successful attempt at consistent personal journaling to date. And it’s about caplog, the little can-do utility I wrote to make it easier to journal brief thoughts and longer entries.

There exists a certain class of activities. For activities in this class, people often confuse liking doing the activity with liking the idea of doing the activity. Some of the most well known members of that class are include writing, learning/playing music, and exercise. A lot of people feel like they like writing, but they mostly like the idea of writing. They like to imagine writing.

For a long time I thought that my ideas about journaling were confused in that way. I liked the idea of journaling, but after I tried and failed to develop a frequent journaling habit, I started wondering whether I liked journaling itself.

My top two failed attempts at journaling were:

The last con was a fatal one. My pen and paper journaling lasted a long time, but happened very infrequently. My entries were very long and I never went back to read any of them.

I think I moved off of Momento when the app was buggy on a new iOS version and the developer(s) were late to update it. I say I think because I’m not sure if I’m remembering that correctly.2 When Day One’s developers released Day One 2 and made their sync service the only option for syncing, I quit the app.3

I got the idea for caplog from t, the task manager I’ve been using for years. t is a simple Python script that stores tasks in a plain text file. I added a couple of features in my fork, like the -t switch for tagging tasks with @today and parsing of @{date} syntax to tag the task with @today when the date matches the current day. But it works for me because 1) I can use it from the terminal, my natural habitat, and 2) storing tasks in a plain text file means I can add tasks to the file even if I don’t have access to my terminal.

caplog started as a simple exercise in learning how to store stuff in a SQLite database with Python. First I got it to work doing only the simplest task: put an entry with a timestamp into the table, then slowly added features.

Here’s where it is today:

caplog has a --random flag to show me a random entry from my journal. This is important because there is little point in writing personal notes if I’m never going to read them in the future. I run caplog -r more often than you’d think.

The --past flag in the demo above is how I write most of my entries. Sometimes when I’m thinking about my day I remember something that I want to write about, and I try to enter it with the closest timestamp to when I think it actually happened. Using neovim for text entry was something I only added recently, and it’s amazing!

Another favorite and recent feature: caplog has a --batch flag. You can pass caplog --batch a path and it will look in that folder for text files that have a date and time in the first line, and add the rest of the file as an entry for that date and time. The --batch flag is how I use the Drafts app to add caplog entries from my phone.

I write an entry, 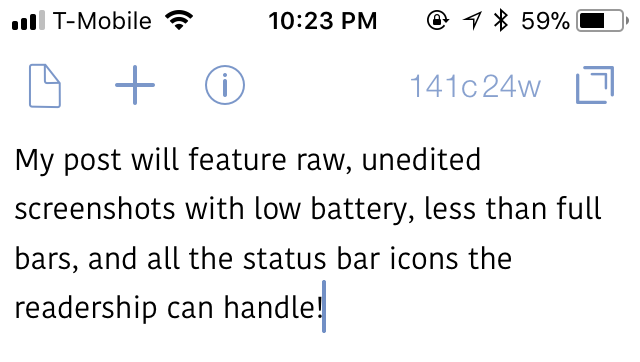 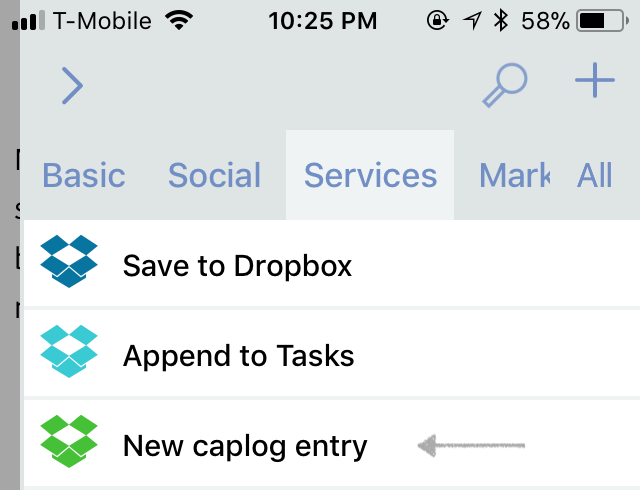 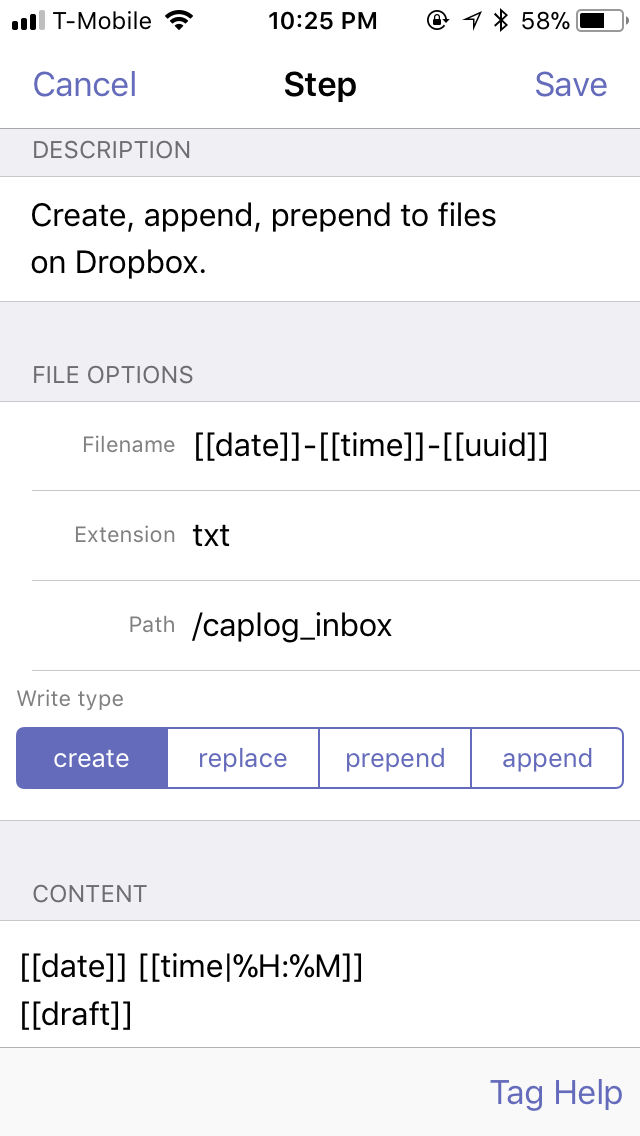 And on my home computer I have a scheduled task that runs caplog --batch ~/Dropbox/caplog_inbox and adds all the entries there to my journal. It all seems like a big hack, but it works and it makes me smile and that’s all that matters!

I am very happy with this setup! This is surprising to me because I had given up on finding a journaling solution that would work well enough on the long term.

Tools like t and caplog working so well for me demonstrate that I am picky and sometimes have preferences that can only be met if I write my own software. I’m fine with that. It’s why I love computers so much.