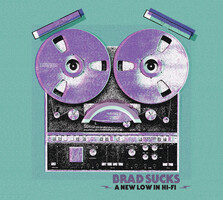 Brad Sucks is a one-man band fronted (and backed, and middled, I suppose) by Brad Turcotte. The first song I heard by Brad, “Making me Nervous”, was in 2003, off of his I Don’t Know What I’m Doing album which I found it on a weird ass site called Jamendo.1 It was weird because it was full of music that indie artists uploaded for everyone to download for free. I was new to the internet and a lot of other things in this world, but I thought I understood enough to know that if you gave something away for free, you didn’t make any money from it. How simple.

I now know that Brad making I Don’t Know What I’m Doing free for download on Jamendo led to me giving him a lot of money over the years. And Jamendo’s model foretold a lot of how the creation economy on the internet was going to be. Years later, a guy who makes music and puts it online for free is one of my favorite artists, and his first album that he gave away for free became one of my all-time favorites.

I think a little distance might be just what I need
I don’t know when or why or how everything got to be so extreme
Ain’t got no interest in wishing, no real desire to believe
I’m not tired of living, living’s tired of me

I guess I had double vision, but it was easy to see
It didn’t make any difference, baby, if you know what I mean
Been out here burning bridges like they been giving them away for free
I’m not tired of living, baby, living’s tired of me

I love Brad’s songwriting. I don’t know anyone who writes music like he does. The words read so simply, the way you’d talk to a friend over coffee, but they sound so musical and poetic, and the extreme straightforwardness makes them sincere and believable.

It’s just so good and so clever, and as good as the lyrics are, the way he sings them, landing every syllable and every line perfectly, takes the songs to another level. It’s noisy and intimate, casual but from the heart. Trust me you don’t know the half of it until you listen to it. And you should listen to it.

Get A New Low in Hi-Fi on Bandcamp.