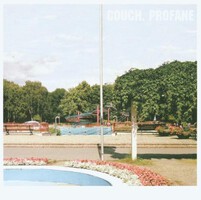 This album was added to my library in early 2015. ‘Was added’ is passive, and the passive voice is a tool to hedge and avoid responsibility,1 which is why I usually avoid it. But in this case, I actually don’t remember adding it. Of course, I don’t remember adding hundreds of other albums that sit, waiting, unlistened-to, in my iTunes library.

Profane is an instrumental album. I can’t quote you any favorite lyrics. I can try words like ‘dreamlike’ and ‘post-modern’, but that could mean anything. The band doesn’t have a Wikipedia page, and “couchmusik.de” goes to what I assume is a German domain registrar’s page. So how can I describe this to you?

A quieter and more consistent God is an Astronaut, and a faster Bonobo. A simpler Maybeshewill and an abbreviated and more disciplined Mogwai. Describing an artist’s work in terms of other artists is a last resort for me, but describing music is hard, and I’m not that good of a writer yet.

Profane is dramatic and progressive, it has anxiety which becomes cacophony; not the annoying kind, the beautiful cathartic kind.

Listen to “Doch endlich”, you’ll know what I mean.

Unfortunately this album is not on Bandcamp, and I don’t see the CD being sold anywhere obvious, but it is sold in the Apple Music Store, and you should listen to it.

Get Profane on Apple Music.