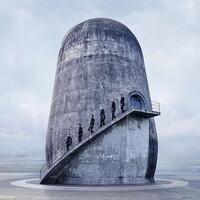 As with my album note of The Birthday Massacre’s Diamonds, I want to write about Zeit because of my history of listening to Rammstein, and how they make me feel.

I can’t explain how they match melancholy and intensity, beauty and cacophony, harmony and precise, brutal, chest-shredding distortion like they do. I’m not saying they’re the only ones who can represent all of those on a record, but no one does it like they do.

When a band has one vocalist, that vocalist is usually the center of the band’s presence. The way that can come across is that the band makes music that fits the singer’s voice and surrounds it. But it feels like that’s backwards with Till Lindemann, Rammstein’s vocalist. It feels like they created his voice to match Rammstein’s music.

I learned that Lindemann’s voice is a “dramatic baritone”. How perfect is that description. I think if we tried to create a voice to match Rammstein’s sound, we couldn’t come up with a voice better than Lindemann’s.

The first three tracks are my favorites. “Armee der Tristen”, “Zeit”, and “Schwarz”.

“Zeit”. What can I say about “Zeit”. Why don’t you just watch the music video?1

It’s a beautiful song, with beautiful lyrics, and a music video that probably took more work than many movies. There’s a full minute of credits at the end.

Finally, “Schwarz”. “Schwarz” is my favorite of the three. Putting lyrics aside (and they are raw and real), it’s the most musically moving track to me.

Right when Lindemann sings “Der Sonnentod ist mir Vergnügen” in the second and third choruses, there’s a theremin tune in the background that just kills me.

It’s like that scene in Almost Famous when Russell is talking to William about “that woo, that single woo” in the song “What’s Going On”. That’s what you remember, the little things.

Zeit isn’t perfect. “Giftig” which comes right after “Schwarz” is a jarring transition, and none of the songs after “Schwarz” stayed with me until “Adieu”, which gets an honorable mention for being one of the best album-closers I’ve ever heard.

And according to Last.fm, Rammstein is the second most played artist in my library. Three thousand, one hundred, and fifteen plays across nine albums played from sometime before 2008 until today. Rammstein’s music is woven throughout my entire adult life, and there is meaning beyond words to that.

Zeit is beautiful and flawed, and you should listen to it.