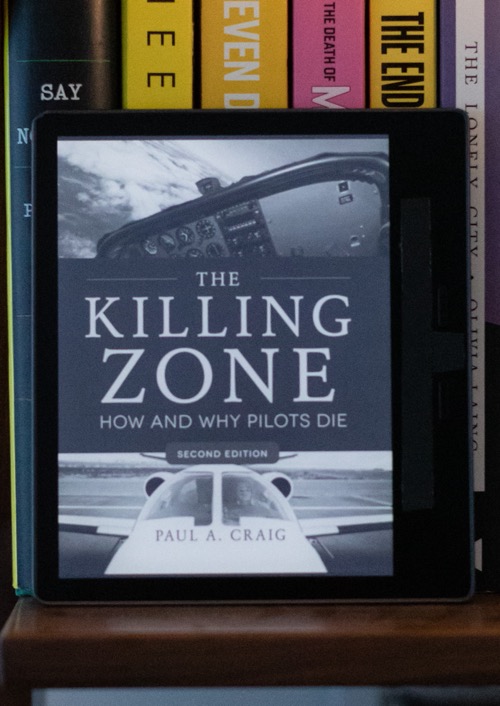 Be very careful when temperatures are rising from below freezing overnight. It is a good idea to walk to the end of the wing and gently rock the wing up and down. This might help move water to the lowest point in the tank and fuel system, where it will come out in the drain. (Location 2999)

My biggest project for 2020 was starting my pilot training. In the United States, the most common pilot license is the private pilot license, which allows you to fly yourself and others for fun but not for pay. If, like me, you were unfamiliar with general aviation, thinking of becoming a pilot brings images of these flight decks to mind:

But flying general aviation puts you behind one of these:

The systems and controls are wildly different. An even more important difference is safety. It’s common knowledge that aviation has become so safe that you’re more likely to die driving a car. There were “no fatal passenger jet crashes” in 2017.

General aviation is a separate matter. Not only is GA’s fatality rate significantly worse than the airlines, it’s also worse than driving.

The only way to eliminate the risk is to not fly.1 If you’re gonna fly, you – at least I – can find some reassurance in knowing that most fatalities are entirely or partially attributable to pilot error. Either pilots do something reckless and/or stupid, manufacturing a lethal situation out of nothing, or they’re unprepared to deal with an unusual event or emergency that could’ve been survivable with better training and instincts.2

Guess what, I control the pilot, and reading The Killing Zone is part of my plan to reduce my contribution to the risk of flying to its absolute minimum.

I like the first quote about rocking the plane’s wings to make water in the fuel tanks settle because it’s a brief, clear demonstration of the simple mechanics of small planes. Small planes are simpler than you think. Since most small planes were made decades ago, they’re even simpler than most present-day cars.

Simple systems fail for simple reasons, but that doesn’t make the failure less catastrophic. The fuel tank can be left uncovered for a few hours, or the tank cap can have a degraded seal, and moisture gets in. Moisture condenses into water, water contaminates the fuel which goes to the engine, and if you have enough water the engine will die.

Which is exactly what happened in the accident that prompted the quote. A small plane lost engine power when water in the fuel tanks got to the engine. Water is heavier than aviation fuel and it will sink to the bottom if it gets in the tank. When you learn how to do a pre-flight inspection, you learn to sump fuel from the tanks for this exact reason, to detect water. The accident pilot did sump the fuel and found the samples clean, so what happened? The investigation concluded that the samples were clean because the water was frozen when the pilot sampled the fuel in the early morning hours, which is why the engine lost power 45 minutes into the flight after the temperature got warmer and melted the ice in the tanks.

The consensus is that becoming a safer pilot can either happen from experience or education. Experience is measured in hours, and the number of flight hours is a critical metric in aviation: it impacts your eligibility for examinations, certificates, jobs, and ability to carry passengers.

The killing zone is not a geographical one, it’s a zone defined by a range of flight hours. The author’s main argument is that a spike of fatalities for pilots with 50 to 350-400 flight hours is evidence of a dangerous zone of experience right after pilots get their certificates and stop receiving instruction but right before they’re proficient enough to fly well.

There are criticisms of the author’s use of statistics, and I won’t litigate that here because I don’t care, and I think worrying about the validity of the zone distracts from a better conclusion: you should always assume you’re in a dangerous zone.

If I had to name the biggest killer of pilots, it’s complacency. I think you’re likely to become complacent if you think you’ll magically be less likely to die after you’ve logged 400+ hours than if you forget about these hours and nurture a sense or paranoia at all times.

So regardless of the statistics, if you’re learning to fly you should read this book as an exercise in the second path to becoming a safer pilot: education. The book’s value lies in the taxonomy of accidents (e.g., takeoffs, landings, runway incursions, midair collisions, etc.) and the accident reports it includes for each category.

I think the author picked a good set of accident reports; the reports cover the most common root causes but have enough variety that they introduce new failure modes that I hadn’t considered before. I live on the West Coast, so we don’t have frigid winters, but temperatures do drop below freezing, and I never considered that this could hide water in the tanks.

One more note about why I don’t care about the zone: Safety is treating low likelihood events as quasi-certainties and being prepared to act when, not if, they happen.

Frankly, I think the way to be safe is to assume that catastrophe is always just around the corner, and be prepared for it. I’m not sure if the author is arguing that by the end of the 400 hours you do have that paranoia entrenched, I don’t see how, if anything I think the longer you go without an emergency the less likely you’ll think it’s going to happen to you.

A few more highlights from the book:

A pilot planning an early morning flight should know that the temperature usually rises as the sun gets higher in the sky. A 4-degree spread [between temperature and dew point ] at 7:00 a.m. means that fog is less likely to form because the temperature is getting hotter and therefore the spread is getting wider. The fog is said to “burn off.” But a 4-degree spread at 7:00 p.m. is trouble. As the sun disappears there will be no more direct heating from the sun and the temperature will drop. The spread is already only 4 and will probably narrow. The weather-wise pilot knows that fog formation is just an hour or so away. (Location 1350)

Density altitude is simply a measurement of the “quality” of the air. When airplanes fly through dense air three things happen: 1. The wings produce more lift because there are more air molecules to produce lift with. 2. The propeller produces more thrust because there are more air molecules to cut through and push back. 3. The engine produces more power because more air molecules are compressed and then expanded on the power stroke. Low altitude, low temperature, and low humidity produce dense, wonderful air for airplanes to operate in. But the converse is true. High altitude, high temperature, and high humidity make wings sluggish, props dull, and engines weak. (Location 1709)

Who needs a greater wind correction angle to overcome an en route crosswind, a Lear Jet or a Cessna 150? Even a light wind can blow a slow-moving airplane off the centerline when the airplane is in ground effect. If the airplane starts to be pushed off the runway, the trees that line the runway will be much closer than the trees at the end of the runway. A premature liftoff during crosswind conditions means the pilot cannot climb, cannot accelerate, and cannot prevent the wind from blowing the airplane into obstructions downwind. A pilot in that position becomes a passenger who can do nothing more than ride it out. No pilot wants to be reduced to having the same control as a passenger, so plan ahead, read the charts, take your time, and be ready to say no. (Location 1898)

The next one is about a terrible accident caused by engine power loss due to fuel starvation. Context: fuel tanks are in the wings, and some planes have a fuel selector that can be set to the right or left wing tank, but not both, which can lead to the engine being starved of fuel if the selected tank runs out.3 This was one of those planes.

The pilot could not find the fuel selector valve and requested help from the Air Route Traffic Control Center. Before they could help him, the engine lost power. There happened to be a pilot at the ARTCC, who was familiar with the PA-28. By the time he was found and the information was passed to the pilot, the aircraft had nearly descended to the ground. As the pilot was reaching for the fuel selector, the aircraft hit trees and crashed. (Location 3079)

On the chemical process behind night vision:

It takes some time for this photochemical to coat the rods. But the moment the rods are exposed to bright light, the Rhodopsin degenerates and night vision is lost. This is why aircraft flight decks use red light, because red light does not destroy night vision. If you are flying at night and must use a white light, close one eye to preserve night vision in one eye. On dark nights, progressively turn down the illumination of cockpit lights so that the eyes can adapt further and outside vision will improve. But be careful when flying at night near thunderstorms. A flash of lightning will instantly steal your night vision. This is another good reason to stay away from thunderstorms. (Location 3623)

Unfortunately the author succumbed to the temptation of psychological generalizations. He is not the first and will not be the last.

Eric Farmer, writing for the International Journal of Aviation Safety, says that a number of studies have supported the notion that a distinct pilot personality profile exists and can be identified in successful pilots. These studies have identified traits of the pilot personality. The research concludes that pilots are independent achievers who demonstrate competence and enjoy mastering complex tasks. The motivation to fly involves a need for prestige and for control. Those who love to fly desire excitement, power, speed, independence, thrills, and competition. (Location 4497)