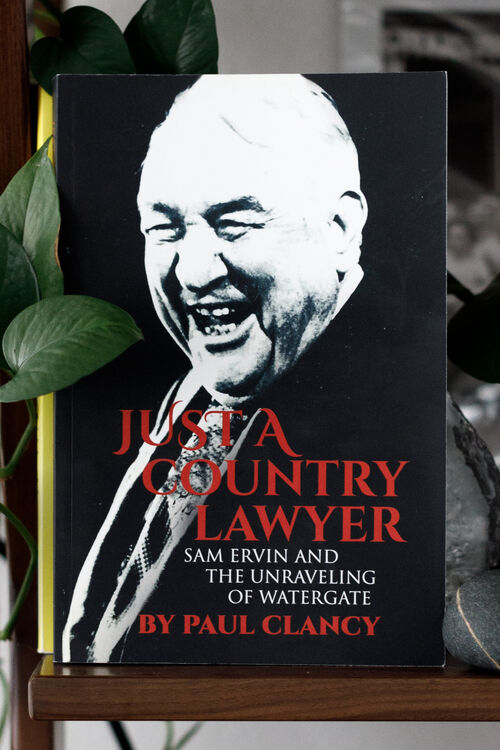 I put this book on my reading list after listening to the first season of the Slow Burn podcast. As a side note that’s too important to be a footnote: Slow Burn’s first season tells stories about Watergate, and is possibly my all-time favorite podcast, mostly because Leon Neyfakh is the best audio story-teller I’ve ever heard. I binged the whole thing in one day, and re-listen to it often. The second season about Clinton/Lewinsky was also very good.

The book is about senator Sam Ervin, who was popular in his day but is probably not a name recognized by many today. Ervin gets mentioned on the podcast for his role as the chair of the Senate Watergate Committee. What caught my attention was that Ervin was a hero for liberals for going after Nixon, but was, as Neyfakh puts it, an “unrepentant segregationist”. The podcast doesn’t go into how or why he was pro-segregation, but as I listened to that in 2019, it blew my mind that a senator could hold that view and still find favor in the eyes of the left. Also Ervin told good jokes and I like good jokes.

Ervin’s capacity for indignation over the mangling of the law by the courts was strongly revealed in the murder case against John Bridges. The prosecutor did his job well in presenting the evidence, but the judge flubbed it by forgetting to tell the jury it had the option of acquitting Bridges. “The state’s testimony tends to show that the prisoner coveted his neighbor’s wife and slew his neighbor with rare atrocity that his physical enjoyment of the wife’s person might be exclusive,” Ervin said. “The very sordidness of the evidence strongly tempts us to say that justice and law are not always synonymous, and to vote for affirmance of the judgment of death on the theory that justice has triumphed, however much law may have suffered.”

Ervin said the ultimate fate of John Bridges was of minor importance in the scheme of things because “his role on life’s stage, like ours, soon ends. But what happens to the law in this case is of the gravest moment. The preservation unimpaired of our basic rules of criminal procedure is an end far more desirable than that of hurrying a single sinner to what may be his merited doom.” (Page 154)

Sam Ervin really cared about the constitution. It feels so cheesy so write that, maybe because as far as I can tell very few people in progressive and/or left circles truly respect the US constitution or why its sanctity that makes it so hard to change is a big deal.1 Progressives want to change and improve things and the constitution’s natural state is stasis. Other than its natural inexplicit state, it explicitly enshrines some ideas that the US left-wing2 wants to change (see: the Second Amendment). The frustration that comes out of the failure to change that through existing amendment procedures pushes many to despise the setup of the entire document.

I don’t know enough about Sam Ervin to know what was in his heart when it comes to race and desegregation. His explicit view was that he saw all races as equal and had friendly relations with everyone, and that what put him in a seemingly anti desegregation position is that he objected to how laws were being passed to enforce it. The book advocates that explanation too.

Ervin’s voting history supports the “it’s complicated” angle on his beliefs. He voted against expansions of immigration quotas and tried to attach an exemption from drafting women to the Equal Rights Amendment Act, but he also opposed prayer in public schools and voted against data collection practices and “no knock” searches. He’s impossible to pigeonhole into an ideological camp.

During the next year, Ervin wrote an epic speech on the First Amendment and delivered it dozens of times:

“The First Amendment grants its freedoms to all persons within the boundaries of our country without regard to whether they are wise or foolish, learned or ignorant, profound or shallow, brave or timid, or devout or ungodly, and without regard to whether they love or hate our country and its institutions. Consequently, the amendment protects the expression of all kinds of ideas, no matter how antiquated, novel, or queer they may be. “In the final analysis, the First Amendment is based upon an abiding faith that our country has nothing to fear from the exercise of its freedoms as long as it leaves truth free to combat error. I share that faith. “To be sure, the exercise of First Amendment rights by others may annoy us and subject us at times to tirades of intellectual and political rubbish. This is a small price to pay however, for the benefits which the exercise of these rights bestows on our country.”

I wonder what he would think about the free speech issues we’ve been dealing with in the last few years.

The debate is about what private companies allow or prohibit, which means that almost none of the debate is actually about the First Amendment. That’s fine, but unless the majority of the country believes in the spirit behind it, the constitution is just a piece of paper, and so it’s the spirit I’m concerned with. Even if wanting private companies to take increasingly active roles in policing speech has nothing to do with the First Amendment, it has everything to do with lower-case free speech. How tolerant are we of wrong or offensive speech? Do we still understand what was protected when we made such a big deal out of free speech in the first place?

Ervin always found the very best poetry to illustrate his convictions, whether it was contained in the Bible, in literature, or in the words of great statesmen of the ages.

William Pitt the Elder had said all that needed to be said on this subject before the American Revolution. Ervin recited it word-for-word:

“The poorest man may in his cottage bid defiance to all the forces of the crown. It may be frail, its roof may shake, the wind may blow through it, the storm may enter, but the King of England cannot enter. All his force dares not cross the threshold of the ruined tenement.” (Page 273)

I don’t have a whole lot to say about this one, it’s just a really good quote.

Look, should you read this book? I don’t know. It was a bit of a slog; more of an exploration of what made Sam Ervin a complicated politician than it was a deep dive into his role in Watergate (which is fair, the book’s about him, not Watergate).

The book won’t satisfy you if you’re looking for the equivalent of The Years of Lyndon Johnson but about Ervin. It’s not that. It’s a relatively short and uncritical biography. Read it if you’re curious about how a true constitutional legal mind wrestles with the conflict between the law and delayed justice, and nostalgia for the days when you didn’t get cancelled so easily.

Note: The title on the cover page of the book reads “Just a Country Lawyer: Sam Ervin and the Unraveling of Watergate”. I can’t find a book with that title, or the ISBN printed on the back (9781097619795) on Worldcat. What I can find, is a book with almost the same exact cover titled “Just a country lawyer: a biography of Senator Sam Ervin”. That latter title makes more sense; the book is a biography, and Watergate is a very small part of it. I don’t know what happened with the title change.